The hills are alive in North Wales with the cranky rhythm of chugging wheels, and the whistle of coal-powered trains as a stream of steam is funnelled out through their chimney.

It’s a mode of transport that hails from the early 19th century that all too soon came to the end of the line.

Rail enthusiasts have set in motion a revival of the Welsh Highland Railways and Ffestiniog Railway bringing the steamy affair of vintage travel by railway through this amazing landscape, right back on track.

I book my carriage. 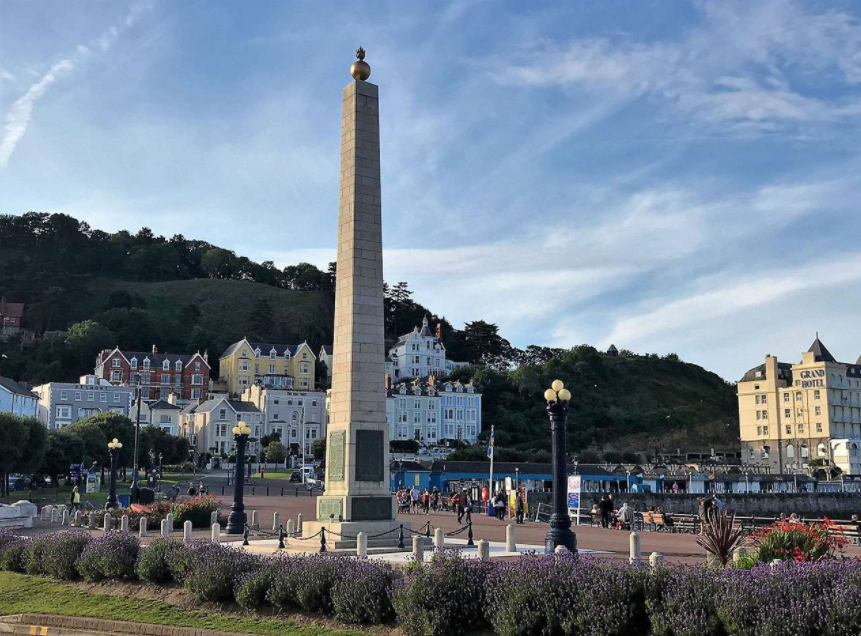 The seaside town of Llandudno is my base, a pretty town with a mish mash of elegant Victorian and Edwardian architecture and pleasant scenery. It stretches out from the foot of the Great Orme, a huge chunk of limestone that curves around the town. It surges up from the sea and towards the seafront and its wide ribbon of sandy beach and an even wider promenade with a war memorial obelisk as its landmark.

My first rail adventure starts in Caernarfon where I alight the delightful narrow gauge Welsh Highland Railway train. The line was built in 1923 but economically it was derailed soon after. After 70 years in the sidings, it was pulled back into service by a group of railway enthusiasts. 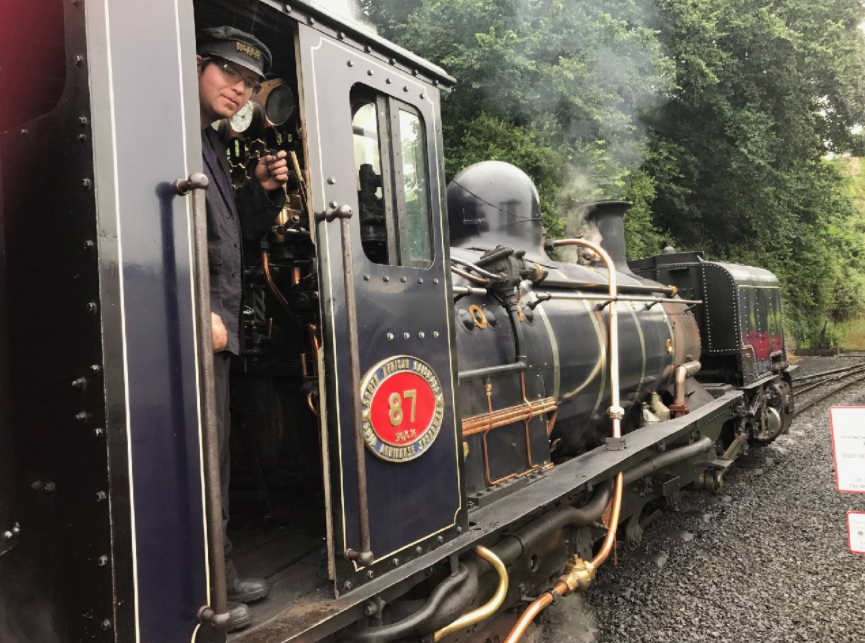 The locomotive is engine 87 and as I watch the steam funnel out it leaves a dreamy nostalgia in its wake. So it’s surprising that the vintage styled wood-decked carriages are in fact no more than 20 years old, and some just a couple of months old. A modern kitchen serves sandwiches and of course Welsh rarebit (a version of cheese on toast) and a tea trolley does the rounds.

The journey passes through Caernafon Bay and the Lley Peninsuala, the old slate quarries and once at Bryn Gloch the Snowdonia National Park unfolds beyond. The valley narrows dramatically as we pass between mountains Moel Eilio and Mynydd Mawr.

Now it’s all alpine views and tumbling waterfalls towards Rhyd Ddu. Soon we climb to the summit of the line at Pitts Head and soon after the train begins its descent zig-zagging all the way down the hillside to Beddgelert. The top speed is 25mph so there’s time savour and digest what my eyes are devouring. 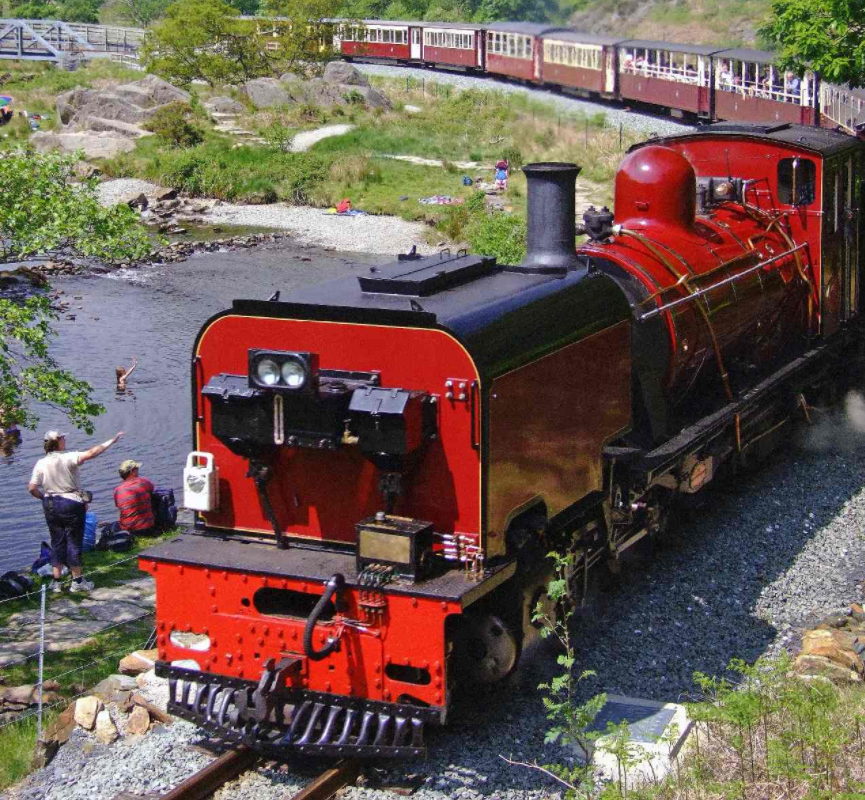 The entire length of the line is 25 miles all the way to Porthmadog, but I was disembarking at Beddgeert to make my way to Portmeirion.

Those of a certain age will remember the cult series The Prisoner. Actor Patrick Mcgoohan, aka No. 6, was regularly chased (there were 17 episodes) by a balloon each time he tried to escape. 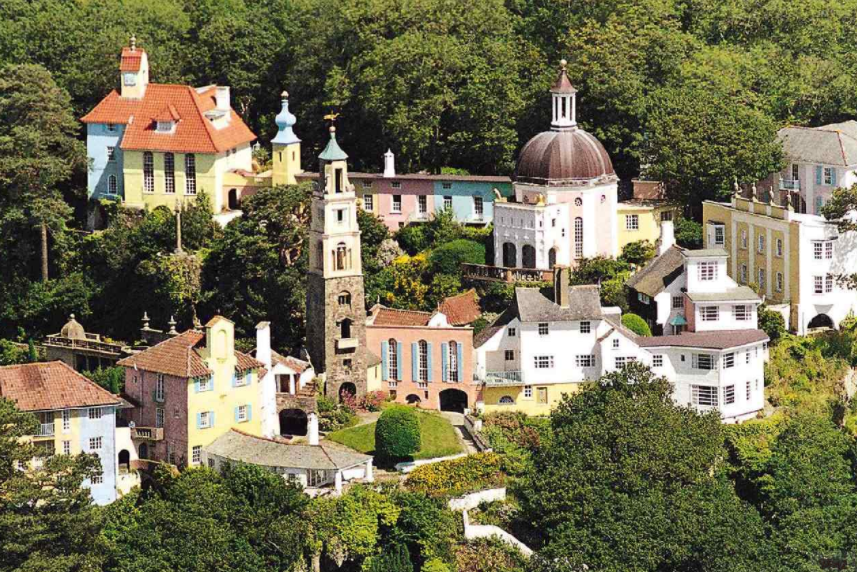 The 70-acre Italianate Portmeiron Village was created out of the fantastical imagination of architect Sir Clough Williams-Ellis. Anything that caught his fancy on his travels ended up here. Even the odd relic from film sets.

No-one lives at the holiday complex; it’s all hotels, eateries, a beach and 19 miles of footpaths through lush greenery. It took him 50 years to complete yet this unusual man never spent a night here – he was simply showing off his skills.

Turns out Prince Edward and Mrs Simpson stayed in the Peacock suite in the hotel, Brian Epstein stayed in Gate House and Jules Holland loved the 2-bed Unicorn building so much he made a replica in his garden. There’s also the Bristol Colonnade where the Welsh choir often sings

Porthmadog to Blaenau – The Festiniog Railway

The Festiniog Railway Company is the oldest surviving railway company in the world. It opened in 1836 to take slate from the quarries of Blaenau Ffestiniog to Porthmadog for export around the globe. But nothing lasts forever and it’s raison d’etre disappeared when the quarries closed down. So again it was down to the rail enthusiasts (bless them) to revive it in 1945 as a tourist attraction.

The engine is the Merddin Emrys named after a Welsh wizard. It’s a push-me pull-you Double Fairlie that pulls us up to Minfford and then Penrhyn offering brilliant alpine views across the valley down the Dwyryd Estuary to Harlech Castle. Every station we stopped at reminded me of those I had seen in episodes of Thomas the Tank Engine with my toddler. It was beyond quaint.

As we climb, a rugged landscape unfolds through the Snowdonia National Park passing woods and dips before doing a extraordinary loop-the-loop at the Dduallt Spiral.

Llangollen to Corwen and back – Llangollen Railway

This was once a British Rail line but closed in 1968. Restored in 1975 by enthusiasts it is the only standard gauge heritage railway in North Wales. The locomotive, a restored 80072, was built in 1953 and the train’s carriages look the part in upholstered red velvet seats and dark wood panelling. It was all very civilized so taking a tea of scones and jam served on a white linen table cloth seems the right thing to do.

Llangollen and a horse drawn boat

Llangollen is a pretty but eccentric ancient town. There are 3,000 inhabitants and some most unusual shops from a Wiccan store to a taxidermy studio with stuffed animals for sale – I know. Looking up at an isolated hill I could see the eerie ruins of Castell Dinas Bran (Crow Castle). 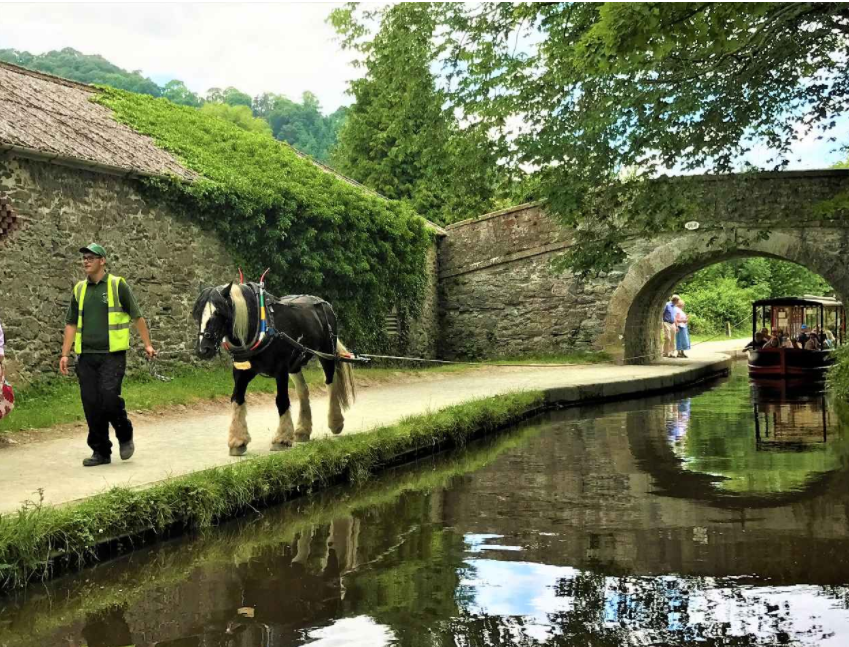 The highlight though is the Horse drawn boat trips. Boats are pulled by a shire horse with a rope and these slow motion trips along the River Dee last around 30 minutes, enough time to zone out and enjoy the serenity.

Mount Snowdon Railway and the mountain

Reaching the peak of Mount Snowdon may be a glorious experience but for the last 17 years it was only doable if you were prepared to undergo a robust hike to the top. 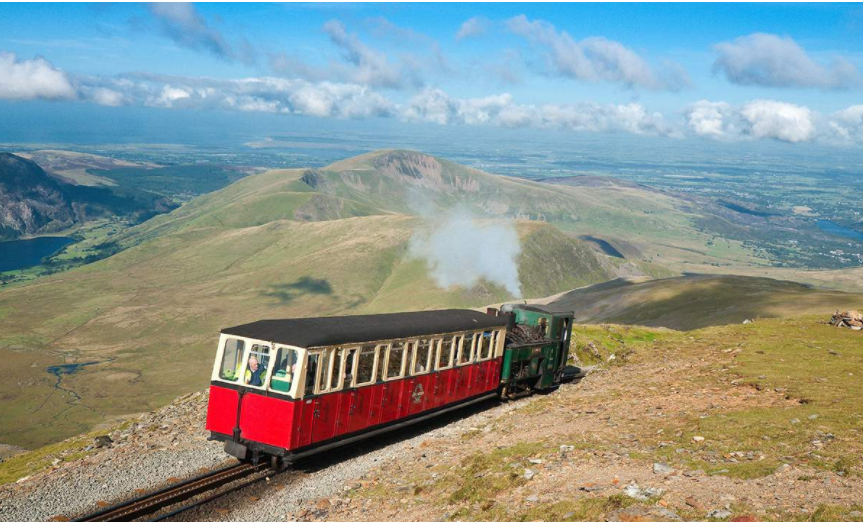 For less active mortals like myself it’s a joy to ride in an Ivor the Tank Engine look-a-like. The locomotive is  now 121 years old. It was recently revived after undergoing a £60,000 overhaul. Ivor, who in fact is a Wadffa engine, spent almost two decades in the sidings but now this vintage Victorian steam train is back on track.

The engine pushes the train up from Llanberris station to the top of Mt Snowdon and with a highly respectable height of 3,500ft is the highest in England and Wales. The train needs 350kg of coal and 2,000 litres of water each trip. It can’t carry all the water in one go so it stops halfway along the five mile journey to top up.

It is scenic five-mile trip with views of mountains dotted with the chapel ruins and nonchalant sheep. There are several lakes including Llyn Glas which at 637m above sea level makes it Wales’ highest lake. The higher we reached the rockier the landscape becomes. 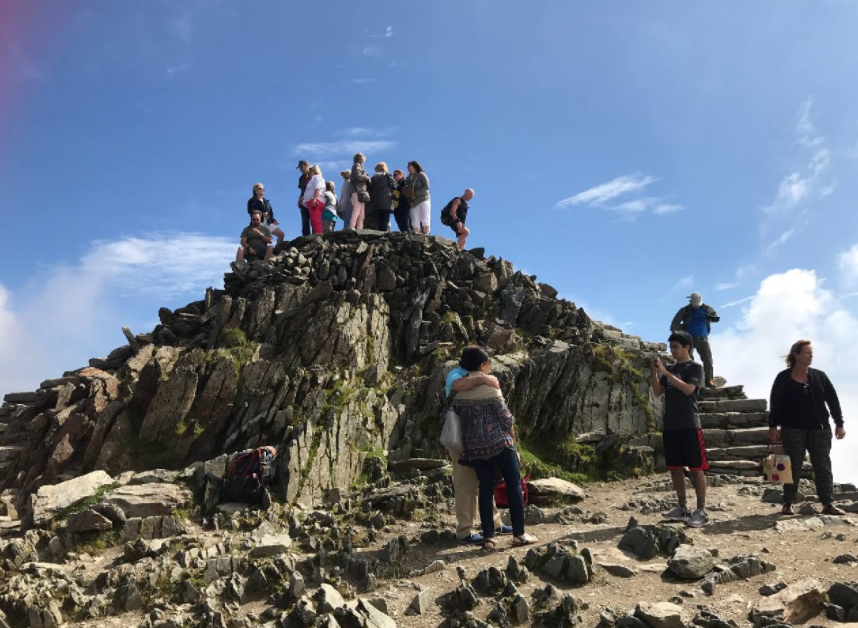 This is a place of legend. Another lake, Ffynnon-y-gwas means lake of the servant’s spring names so because a servant drowned in its waters while dipping his master’s sheep. They also say Snowdon is the burial place of the giant ogre, Rhita, vanquished by King Arthur.

The round trip is a slow trundle and takes two hours over viaducts, twists and turns and of course time at the top where the views are exhilarating.