Most babies enter the world in a flurry of tears—but not Isabela Pereira de Jesus. Instead, this baby girl, who was born on February 13, came into the world with a scowl on her face…and she's going viral for it.

Isabela was born in Rio de Janeiro, Brazil to mama Daiane de Jesus Barbosa. According to Rodrigo Kunstmann, the photographer hired to capture images from the birth, the baby didn't shed a tear when she came into the world.

"She opened her eyes wide but did not cry. The doctor even had to say, 'cry, Isa!',"the photographer told Brazilian magazine Crescer. "She made that serious expression and only started crying after the umbilical cord was cut."

Having a babe who opted to do something other than cry at birth may not seem so out of the ordinary, but wait until you see this baby girl's face at birth. Her mean mug is hilariously adorable—think furrowed brow, downturned lips and overall expression that can only be described as "unimpressed." 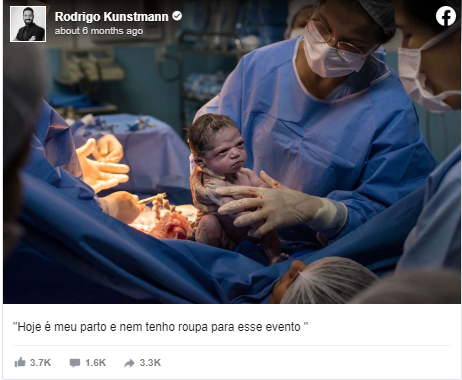 "My baby was born courageous," Isabela's mother said, according to a report from Daily Mail. "It's a meme already. She always wrinkles her forehead when changing diapers and nursing."

Not surprisingly, the photo of the baby's expression has become a global sensation, with outlets all over the world sharing the image. The photographer's Facebook post featuring images of the birth is gaining major traction as well. "This little lady is going to lead her parents on a merry chase," one user commented. Another added: "No, put me back! Haha."

This perfect capture is just too good for words! What was going through the baby's head in the moment, we wonder? The photographer has one idea: "Today is my birth and I don't even have clothes for this," he captioned the photo of baby Isabela's hilarious scowl.