.Big Fluffy Dog Rescue is a nonprofit dog rescue located in an industrial complex in La Vergne, Tennessee. They are dedicated to helping large dogs homes and rely heavily on volunteers throughout the United States. Founded by Jean Harrison in 2006, the La Vergne location utilizes the help of volunteers, many of them in their 20s to help walk and take care of the dogs.

For 4 years, the rescue hasn't encountered any issues, but Harrison says that has changed over the past year. "Nothing has really changed on the surface, but for some reason over the past year our female volunteers have been the subject of harassment," Harrison says. "Its been sexual in nature and all targeted towards females." 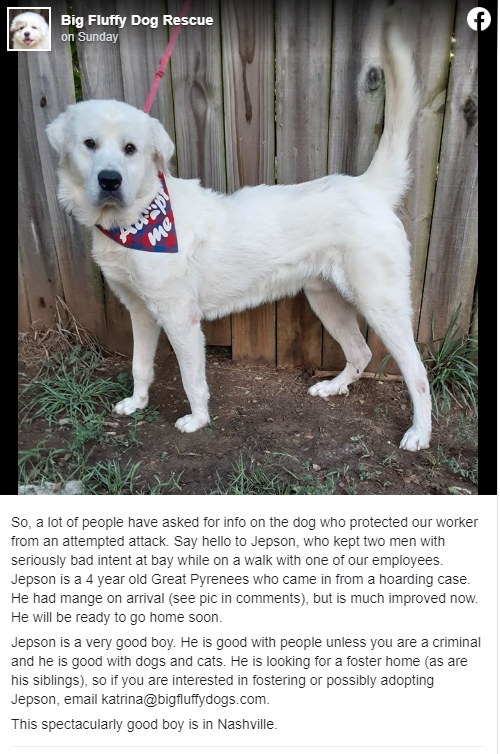 Last Thursday, things escalated to a new level. Harrison says one of the female employees was walking a Great Pyrenees named Jepson at 9:30 in the morning when she bent down with her back towards the road to pet the pup. "The dog started going berserk," Harrison says. "When our volunteer turned around, it was as if the cliche had come to life."

Harrison says a white van had come to a stop and two men exited, heading for the volunteer. The volunteer had to hold Jepson back as he tried to get at the men who said nothing. The dog's protection was enough as the two men went back to the van and sped off Harrison says. "Had she not been walking a Great Pyrenees who decided these men definitely constituted a threat and had that Great Pyrenees not kept them at bay, we could have been national news. Jepson the Pyr is a hero for sure and the employee this happened to is a trooper, but we worry and will continue to worry," Harrison wrote on Facebook following the incident. 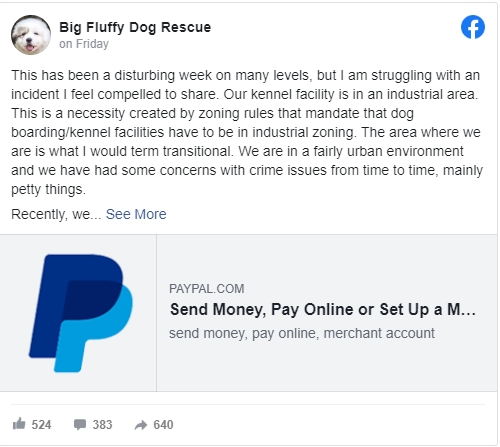 "If we can't walk dogs without people trying to snatch them then we are done," Harrison says. She had been trying to hold off on fundraising for a new location due to the COVID-19 pandemic but the latest incident has pushed her and the board of directors to look for a solution. "Whoever is doing this knows we have a lot of young girls and they are targeting us," Harrison says. "Its too consistent and they know when we're walking them. I've had to stop letting volunteers outside of the premises to walk."

Harrison says a report was filed with police and they are saturating patrols but she knows it is not a long-term solution. "The safety of our people has to be paramount. I have been busy worrying about keeping the kids safe from COVID which has been a challenge. I did not think I would ever be in the position of having to worry about the basic safety of the kids who work for us," Harrison says.

The rescue is now looking for a property between 6,000 and 8,000 square feet which is heated and cooled close to the Nashville area. Given the typical small budgets of a nonprofit, Harrison says they can afford $4,000 per month and is asking anyone with a lead to email [email protected] In the meantime, Harrison is adding security measures and has launched a PayPal account for anyone wishing to donate.