The Pamir Mountains in the tiny Central Asian country of Tajikistan have long been called “The Roof of the World”. And through these dramatic, snow-capped peaks runs the Pamir Highway, arguably the world’s greatest road trip.

Although the exact start and endpoints are a little blurred, the core route stretches from Dushanbe, the capital, to Osh in Kyrgyzstan and with epic scenery and a sense of remoteness it is ideal for adventure travel. 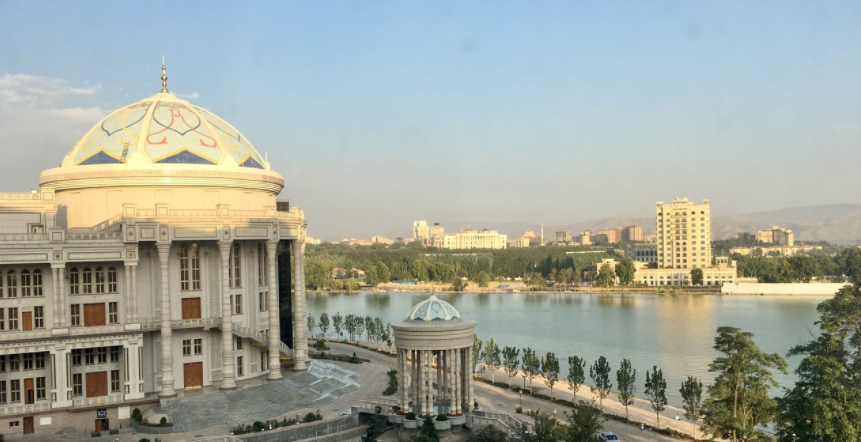 The newly modernised capital city of Tajikistan has seen a surge of new apartment blocks popping up alongside lush urban parks. Old buildings are being knocked down to make way for modernity and the landscape is likely to keep on changing.

Dushanbe started life as a small village is now the largest city in the country and records show archaeological evidence of a settlement here since the 5th century BC.

The Nurek Dam and Reservoir is the second-highest man-made dam in the world. The construction for the dam began in 1961 and it was completed 19 years later, while Tajikistan was still under Soviet rule. The dam’s purpose is to generate hydroelectric power for Tajikistan’s factories and cities, but the lake it created has become an idyllic looking tourist site.

The busiest time is in the Summer when the weather in Dushanbe is unbearably hot there’s an exodus of local residents to the lakeshore: you can go on a boat, stay the night in a guesthouse, and enjoy a relaxing swim, all while being surrounded by stunning mountain scenery. 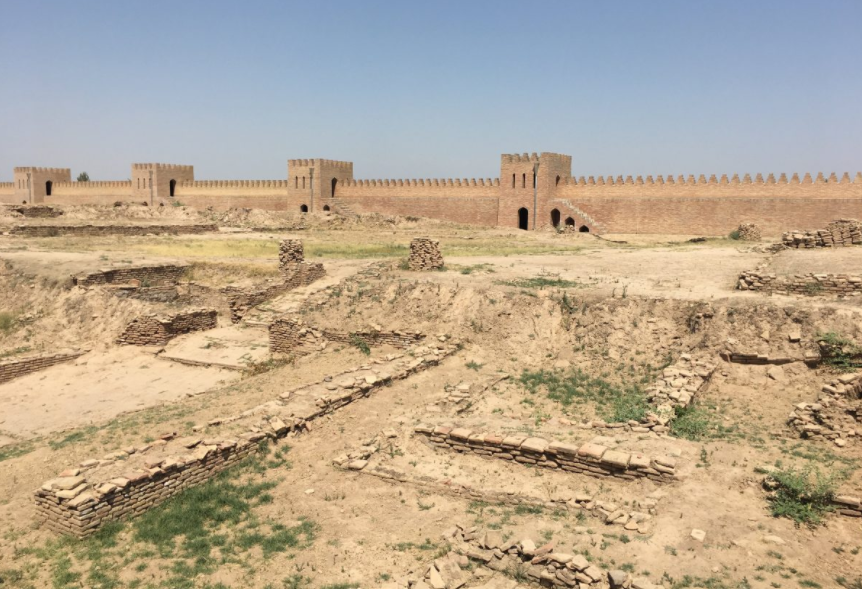 Travelling south from Nurek along the Pamir Highway, not far from the city of Kulob, is a vast, unmissable roadside fortress. The original structure at Hulbuk was destroyed by the Mongols, but the outer walls have recently been reconstructed around the untouched central part of the archaeological site.

Across the road is Hulbuk’s museum home to fine carvings and ceramics, plus a 3D model to help you understand the scale, layout, and importance of the fortress when it was in its prime. 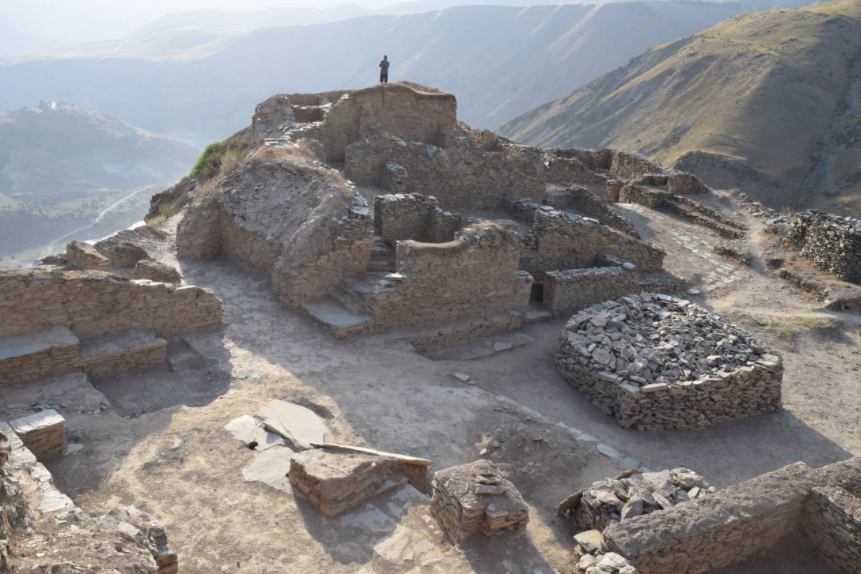 Castle Karon. dubbed as “The Machu Picchu of Tajikistan”. can only be reached by driving along a steep and windy track which climbs high above the Pamir Highway. It’s not for the faint-hearted. Karon is not just a castle but a complete city where people lived and worked. Entertainment was at the polo ground so large it could accommodate 10,000 spectators.

Walking around Karon is a great but slightly strange experience. From the top you look straight down on the Panj River, which is the border with Afghanistan. How is it possible that such an extensive site wasn’t discovered earlier? 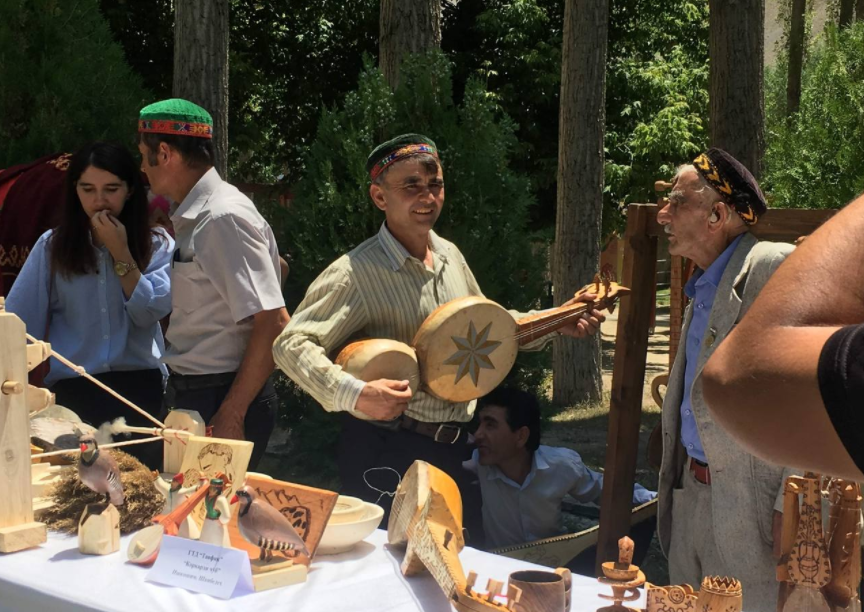 The city of Khorog is the largest settlement in the Pamir, and the cultural centre of the region. It’s here you’ll find a campus of the prestigious University of Central Asia, the cross border market frequented by Afghans and Tajiks alike, the highest botanical garden in the world, and a memorial to the first car to cross the Pamirs.

I arrived in Khorog in July in time for the annual Roof of the World Festival, which this year celebrated its 12th anniversary. The festival started off small but has now become a platform on which to express not only the different cultural customs of the Pamir region but also from neighbouring areas. Dancers, singers, and musicians take to the stage from Uzbekistan, Kyrgyzstan, China, Afghanistan and Pakistan, showing off their talents, whilst most of Khorog’s residents sit in the audience and enjoy the spectacle. 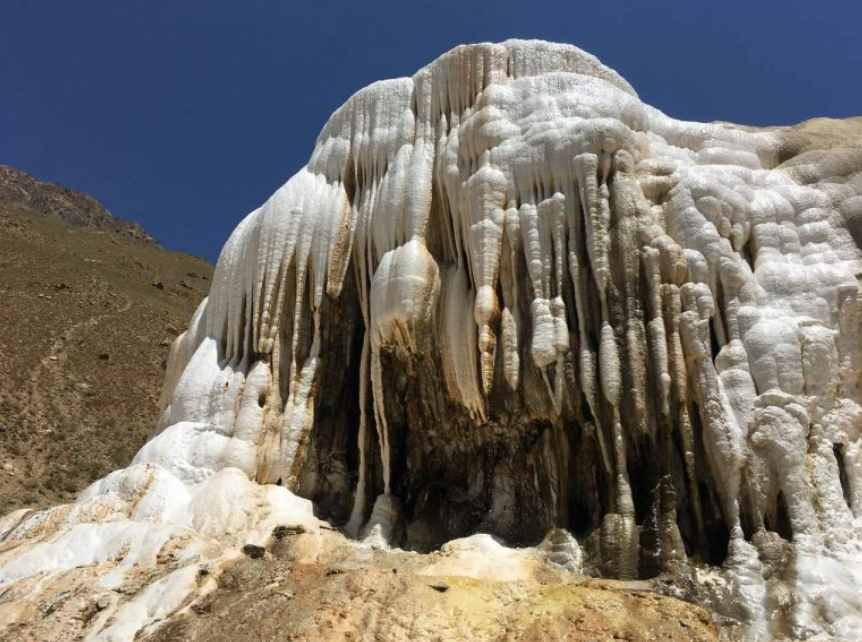 Garm-Chashma means “hot springs”, and the geology of the Pamirs is such that they are relatively commonplace. The most impressive of these springs are in a side valley a short drive south of Khorog: look for the Garm Chashma sign.

The hot spring is natural, and the hard white mineral deposits have created a structure that looks like a large, solid cloud. There’s a secluded bathing pool, and as everyone bathed naked, there are alternating sessions for men and women.

The mountains of Garm-Chashma are rugged, and the river gives off a fresh, cool breeze and offers an easy hiking experience. Though you come across some small and precarious-looking bridges they are in fact completely safe. You will also pass a few friendly donkeys on the trail. 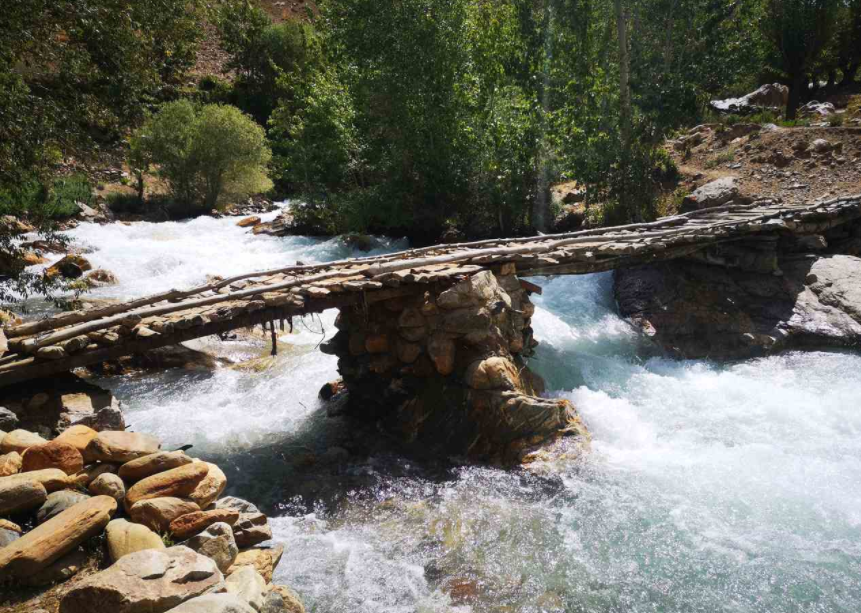 The village of Langar in the Wakhan Corridor is famous for the mountainside petroglyphs. The access trail is windy and steep, and due to the altitude, you tire more quickly than normal. There are around 5,800 drawings here, but more are being identified all the time. 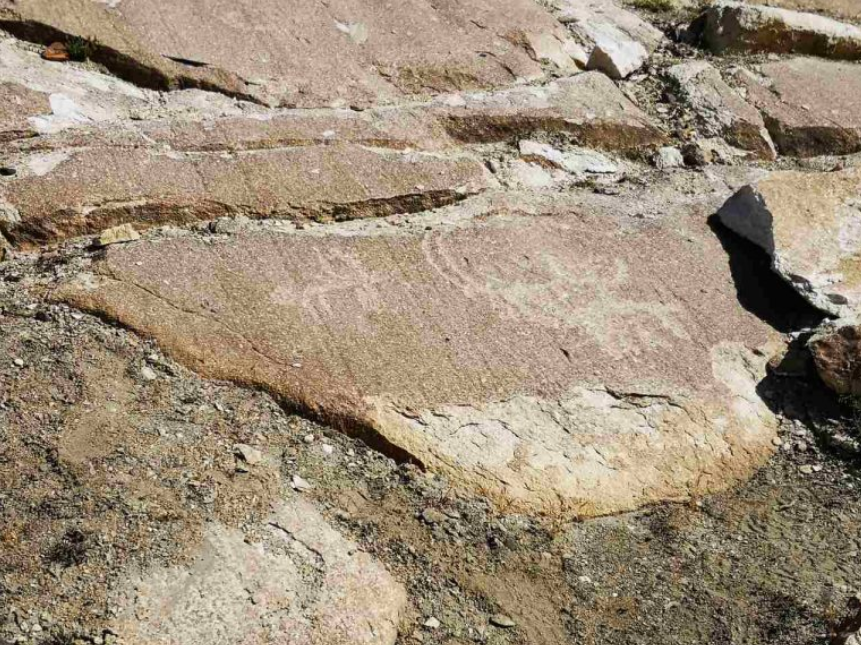 The rock art starts from 2,700m, and the highest petroglyphs are at 3,500m. The earliest works are from the 7th century, and though there is some modern graffiti next to the ancient petroglyphs, it can be easily ignored and doesn’t ruin the beauty of the original drawings.

My favourite images were of the mountain goats, but there’s also a curious one made of three handprints. In my mind, these are the artists’ signature, or perhaps an attempt by a group of family or friends to leave their mark. 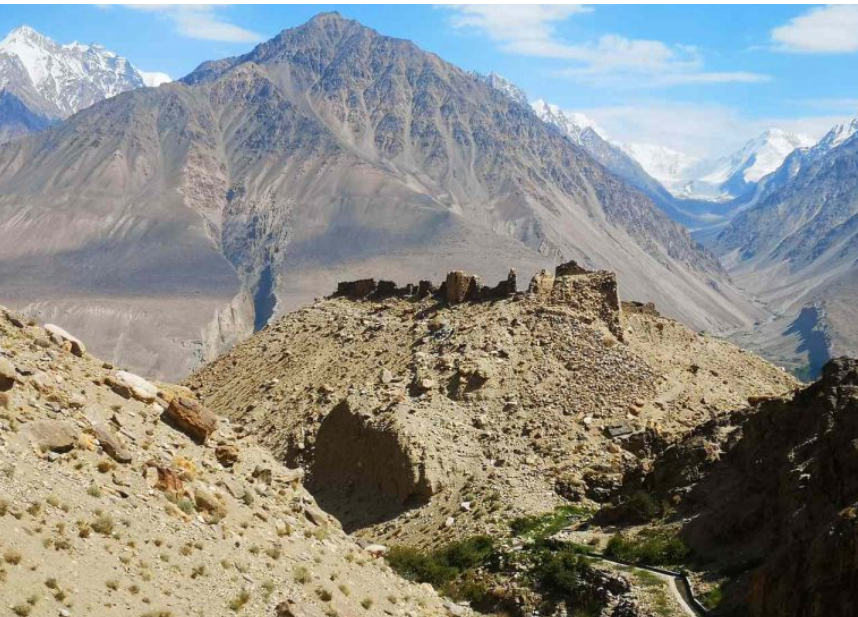 The Wakhan Corridor divides Afghanistan from Tajikistan, and it was along this valley that Silk Road travellers (including Marco Polo) went east to China and south to the Indian Subcontinent. Keeping the trading route open was of strategic and economic importance, so numerous fortresses were erected along the way.

The ruins of the 3rd century Yamchun Fortress are well preserved with parts of its towers and wall in good shape. It stands on a lone hill, and given that the area is prone to earthquakes and landslides, it is in remarkably good condition. To get there you must descend into the gorge before you can start to climb but you will see panoramic views.

You can look both ways along the Wakhan Corridor, and also south to Afghanistan and the snowy mountains of the Hindu Kush. 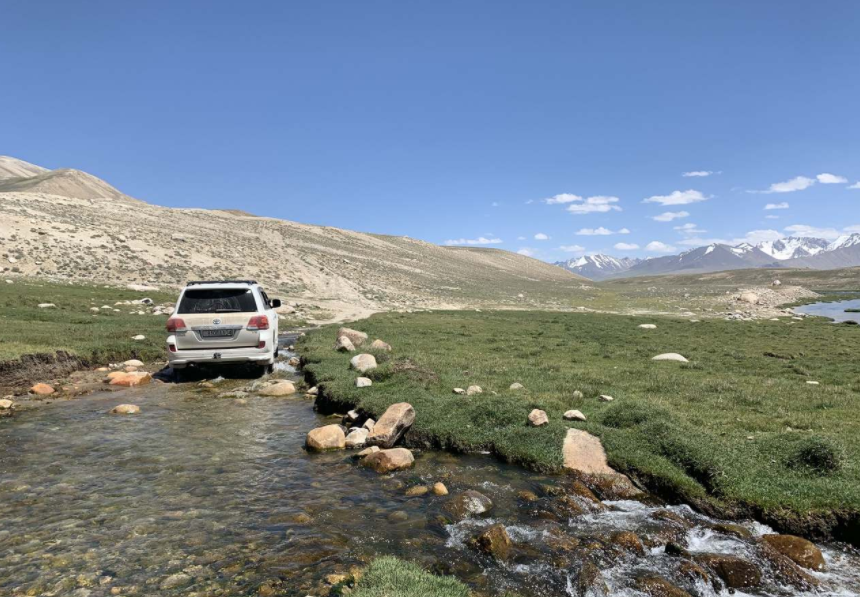 Very few tourists ever go to the Zorkul Nature Reserve as it requires an extra permit and is beyond the Pamir Highway, but if you have the time and can arrange the paperwork, it makes for an incredible detour.

Zorkul has been a nature reserve since the 1970s and it spans an area of 1,610km2 in the eastern Pamirs. The mountain lake which gives the reserve its name is on the migration route for numerous bird species, including bar-headed geese and red-fronted rose finches, and for that reason, it has been recognised as an Important Bird Area by BirdLife International. It’s home to mammals like marmots, the famous Marco Polo sheep, ibex, and even snow leopards, too.