In a week filled with anxiety-inducing news about the spread of coronavirus, it’s important to step away from the hard-hitting headlines for a bit and take a little time for some self-care. If you all do with that time is scroll through some feel-good stories from around the web—trust us, it’ll still be worth it to clear your mind a bit.

Amazing and inspiring things are going on every day, from families expanding to moms sharing their hard-earned wisdom to lift up other moms and families, and they’re all worth celebrating.

A 13-year-old boy has found his forever home, thanks to a big-hearted foster dad. Good Morning America shared the story of Tony Mutabazi and his new dad Peter Mutabazi.

GMA says Tony had been in the foster care system since the age of two. Heartbreakingly, when he was just 11 years old, the family he was staying with at the time abandoned him at a hospital. Around that time, Peter got a call asking if he could take in Tony—an arrangement that was only supposed to last for a couple of days.

But when Peter heard what the boy had been through, the plan immediately changed. “By that time, I was crying. I thought, ‘Who would do that?'” Mutabazi told GMA. “Once I knew the parents’ rights were signed off and he had nowhere to go, I [knew] I had to take him.”

Another big factor in that decision? Peter had once been a 10-year-old runaway in his native Uganda, and he knew what it was like to be in desperate need of a loving home. “For what someone did for me I wanted to do something for someone else,” he told GMA. 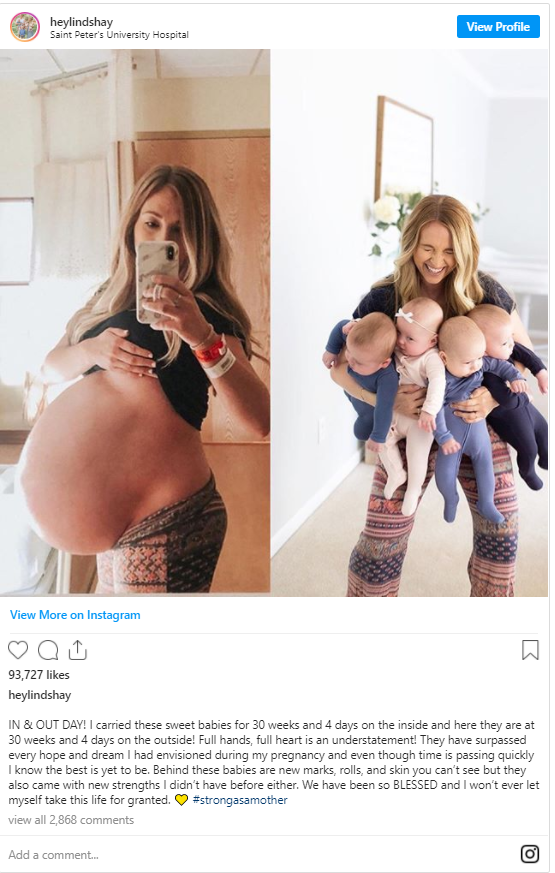 A New Jersey mom is going viral after sharing amazing pictures of her pregnancy journey, showcasing her quadruplet-filled belly side by side with her four little bundles of joy.

Lindsay Hay told TODAY Parents that the path to becoming a mom of five was a hard one, as she went through multiple miscarriages before getting pregnant with her quadruplets. Even then, her doctors urged her to consider a selective pregnancy reduction—which she refused.

Hay says quads Caiden, Madison, Lucas and Grayson have all been thriving at home after their initial 45-day NICU stay. And it may surprise you to hear that Hay says parenting multiples isn’t as chaotic as it’s often portrayed. “We have our moments, but it’s not as hard as people think it is,” she told TODAY. “I don’t stop, I’m always moving and I’m not sleeping the greatest, but TV makes it look so much more dramatic than it really is.” 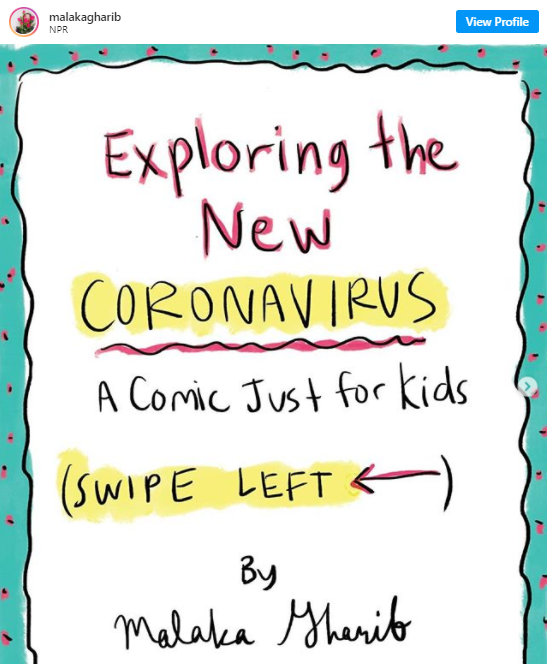 An artist just made explaining the coronavirus to children so much easier for parents. “Exploring the New Coronavirus, a Comic Just for Kids” is by Malaka Gharib, and parents can print it for free here.

The colorful booklet was created for NPR and is filled with adorable illustrations that explain the virus with age-appropriate facts and info that should soothe kids who are feeling fearful, and it’s also based on info from health experts.

It explains that most cases of the virus among kids so far have been mild, with a super cute cartoon likening it to mild and spicy salsa to help little ones understand. It also reassures young readers that doctors and hospitals are closely tracking the virus, so even if someone they know comes down with it, there’s a good chance they’ll recover just fine

Another adorable illustration walks kids through the step by step process of proper hand washing—one of the best possible protections from the virus. Perhaps most important of all, it reminds kids that if they’re feeling confused or scared, they should never be afraid to talk to a trusted adult.

There might be a chance you’ve mourned the loss of your “pre-baby body” at some point, or have heard your mom friends do so. But mom Ashlie Molstad perfectly calls out the futility of doing so in her powerful post. She shared a snap of a new swimsuit she ordered online along with a picture of that same suit worn by a model. Molstad said at first she was disappointed by the way she looked in the one-piece and couldn’t help but compare herself to the model.

But then she had a powerful realization.

“After you’ve had a kid, there is NO SUCH THING as a pre baby body,” she wrote. “The body you have postpartum is post baby. And I don’t think any of us would trade in our kiddo for the body we had before them, right?”

It’s all about perspective, and Molstad’s could be eye-opening for lots of moms. Instead of focusing on pounds and inches, Molstad wants more moms to start focusing on living. “Bodies change as we LIVE. And isn’t that the miraculous thing about them?! The fact that we can grow, adapt, stretch, change…. in quite the same way WE do as we move through life? Who the hell wants to stay the same forever anyway?! Not me.”

And for the record—we think Molstad looks amazing in the suit.